How to craft an even more performing coastal?
Reinventing its shape. 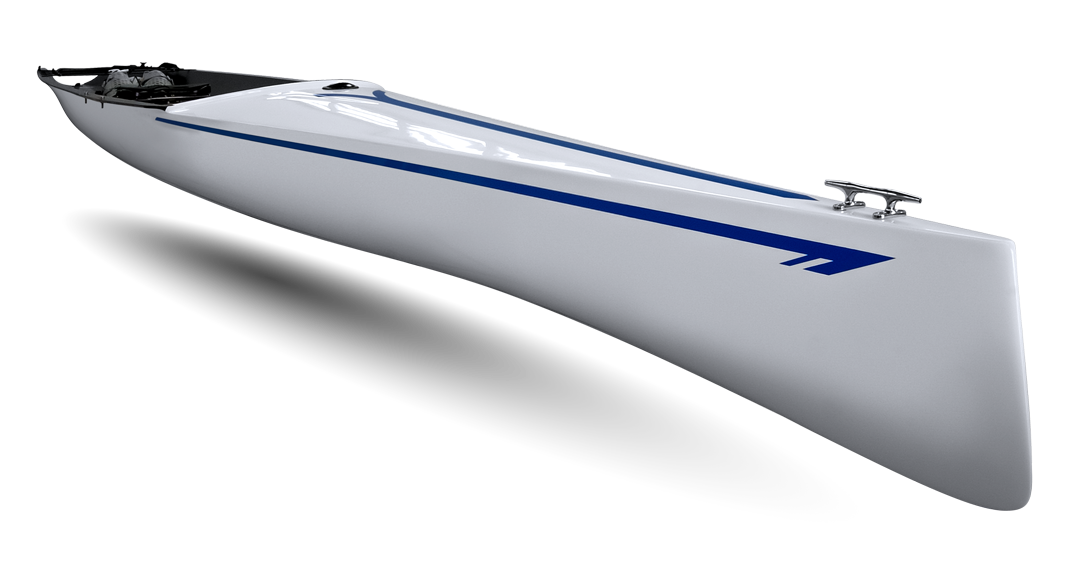 The F83 is born for the sea and it’s a super performing boat; the rowing characteristics of the boat are deduced from the design as soon as you seen it.

Aggressive and fast like no other ever, but also stable to the waves effect, both stern and bow waves.

The boat design starts from the concept of optimal penetration of the waves and fast straight sliding. To this, we have decided to add an easy of manoeuvring to tackle the buoys quickly. Hence the choice to combine two boats together.

All previous knowledge has made this boat an object so futuristic that it deserves a patent.

This type of bow will also be tasted on large sailboats.

The purpose of “opening the water” for a better increase of the central body of the boat is obtained through the penetration of the front part which, immersed, tends to break the natural flow of water that normally would meet the rest of the boat; to this first effect, which can be simply obtained with a bulb, a second one is added due to the flow of the wave in the empty area, therefore without friction resistance: the turbulent water is easily penetrated by the rest of the boat.

The concave area acts also as a reduction of the lateral wave perception, since the bow surface that is hit by the waves has been reduced.

Important then with the stern wave the boat that heel, does not make the classic “splash”, due to the pressure of the bow that impacts the still water creating a vacuum that must be won by the progress of the boat itself.

Without this vacuum effect, the boat leans but not brakes and therefore is much faster. With bow waves the reduced length of the boat with the great curve, makes it easy to pass them following the outline without slowing the pace.

Improvements of the stern

The F83 keel line has also a strong stern curve: this reduces the wet surface and guarantees fast and stable turn. It is also aided by the maximum curve position of the boat, just below the athlete, that allows it to be used as a pivot.

The capacity to surf the stern wave is impressive, generating accelerations previously unthinkable, with a surprising stability. With the help of racing drop keel available, is possible to improve even more the easily turn.

ALL DIMENSIONS ARE GIVEN FOR INDICATIVE PURPOSES ONLY