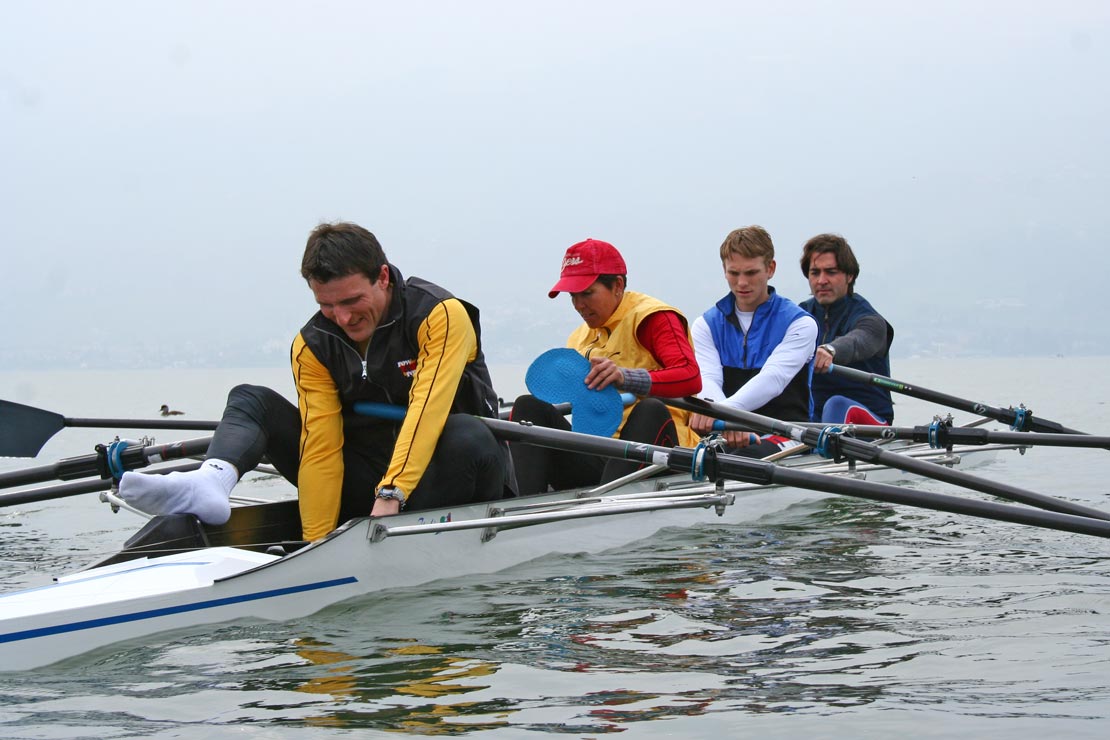 Ueli Bodenmann and Erich Pfister under the company name Doppel2er have been representing Filippi boats in Switzerland since 2008. Let's try to know them better through the words of Ueli, the front man of the firm based in Walzenhausen in Appenzel Canton, close to lake of Costanza, who rowed with a Filippi quad at Atlanta olympic games in 1996.

Hi Ueli ! How long have you been a Filippi dealer ?

My rowing club Seeclub Rorschach bought the first Filippi 4x in 1988. The boat became Swiss champion several times. From 1993 to 1998 I rowed internationally in the Swiss national team in Filippi boats. And since 2008, I have been a Swiss dealer for Filippi boats.

Where your company is based exactly ?

We are stationed in north-eastern Switzerland near Lake of Constance.

Do you arrange Filippi boat tests for your customers and where exactly ?

We are present at all Swiss rowing regattas with our Filippi tent. Boats can be tested at any time with us on Lake of Constance. We often give boats away so that customers can try them out at home. And my rowing school (row&row rowing school) mainly uses Filippi rowing boats. The rowing school is not connected to any club. It is completely independent. The slogan of the rowing school is "row&row - the other rowing school…" which means that we don't have a fixed location. We go to the rowing clubs and to the beautiful lakes. It varies completely how many people take part in our activities. We offer private courses for one person and the rowing holidays in Varese and Seville are advertised with a maximum of 20 people.

Have you been international rower or coach ?

Oh yes, I rowed in the Swiss national team for quite a long time, from junior age 17 until I was 33. After that I was a coach in various rowing clubs and also national coach in the Swiss Rowing Federation.

Could you describe the structure of your company ? (roles and competences)

We are a small company, just 2 people, with the main work on the front being mainly mine. Erich, my business partner, is more active in the background.

Which rowing events are you going to attend on the next year ?

If the COVID situation allows it again, we plan to be present at all Swiss rowing regattas. (click on and look at the regattas where you will meet Doppel2er service in 2022 )

Which was the best year in terms of business as Filippi dealer ?

We had two good years during the COVID years 2020 and 2021. This could not have been expected. The “Fight Together” campaign helped us a lot in reaching out to customers. Due to regatta cancellations, the budgets of the rowing clubs were less strained than during normal rowing years, so they could more invest into new boats.

What does your customer expect from a local dealer ?

On the one hand, a customer wants top products and professional advice on buying them, and on the other hand, the service has to be perfect.

Do you believe in coastal rowing to increase the popularity of our sport ?

Coastal Rowing is the mountain bike of rowing. It is a different, a new sport. I am convinced that with Coastal Rowing, rowing is getting a new boost and new people are attracted, which is important to go into the future.

Why should a customer choose Filippi?

Filippi is the top brand in rowing that is always evolving. If you want to win a rowing race, you must at least have tested a Filippi boat. And once you've rowed in it, you'll never get out again...

How the Filippi service could be improved?

The Filippi service is of a high level. It could be worth thinking about how there are fewer mistakes when ordering spares based on serial numbers of the boats.