A new Olympic record for the Dutch men's double

The French men's double with Hugo Boucheron and Matthieu Androdias on a Filippi boat, knocked once, in the heats this morning, setting the new Olympic record on 2000 meters with 6:10.45.

Not even the time to celebrate both the chronometric result and qualification with the first place, that Dutch colleagues Melvin Twellaar and Stefan Broenink always on a Filippi, knocked twice by aiming higher the bar at 6:08.38.

Fantastic. Just immagine if they had been encouraged by the spectators in the stands! And above all we are only at the beginning... What can happen in the final? Fireworks, for sure... Make yourself confortable.

Such record, as many will remember dates back to 2nd of August 2012, London Olympics, Dorney lake, when New Zealanders, Nathan Cohen and Joseph Sullivan, rigorously on a Filippi (as well as Italy and Slovenia, silver and bronze) won gold, making the clock stop at 6.31.67, new Olympic record. In the meanwhile, 9 years have passed and the Rio Olympics as well.

All things pass, but not our double... 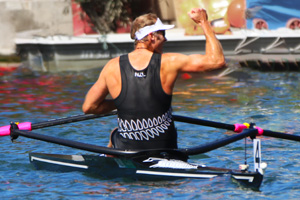